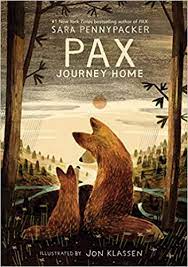 I was so excited when I saw Pax, Journey Home  was coming out. I fell in love with Pax in the first book-who knew you could fall in love with a fox?!?! Sara Pennypacker answers the questions many of us were left with after the first book, including the biggest one: do Pax and Peter ever reunite? In this sequel, as the cover hints at, Pax is a father and still in the wild. As a result of the damage caused by the war, water has become tainted and one of his pups grows ill. It is an unexpected, but very fortunate reunion with Peter that might save not only Pax's son, but also might lighten Peter's heart. This is a sweet story. While of course it would be nice to read the first story, that isn't necessary to enjoy Pax, Journey Home. I will highly recommend this one when the school year opens up next year! -TK
Post a Comment
Read more

All These Bodies by Kendare Blake 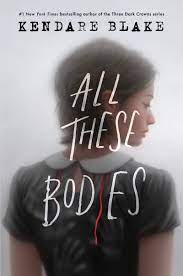 When Marie Catherine Hale is discovered covered head to toe in blood standing in the middle of a small town murder scene, she immediately becomes a witness in a series of gruesome murders. No one knows how these murders can be solved as little blood has been found on the scene and no suspects had been arrested yet. Marie  agrees to be interviewed, but not by the police or the prosecutors. She only agrees to be interviewed to "tell her story" to the son of the town's sheriff.  Michael Jensen wants to be a journalist when he gets older and this might be his shot at stardom. Will he be able to get the truth out of this captivating suspected murderer? Or is she not a murderer at all? Just who, or quite possibly WHAT, is responsible for these horrific crimes? I LOVED THIS BOOK. Blake acknowledges that it was influenced, in part, by the all-time classic In Cold Blood by Truman Capote and it reads eerily similarly. Any fan of true crime stories and murder mysteries will be eng
Post a Comment
Read more

The Violent Season by Sara Walters 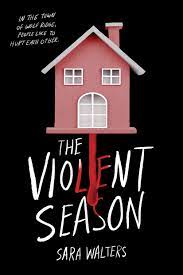 This book is crazy! In a small town that is seemingly beset by violence every November, Wyatt begins to question just what is really behind all of these deaths. Upon stumbling on her mother's murdered body, and seeing some townsfolk die and classmates kill themselves, Wyatt is convinced there is a sickness afflicting the town. Wyatt also worries this sickness is starting to affect her boyfriend Cash, who seems to genuinely want to kill their classmate, Porter. Once Wyatt and Porter become partners for a class project, Wyatt's attention (and affection) is split between the two and she becomes more and more concerned that something terrible is going to happen to someone close to her and she might be in the most danger of anyone! Is there really something terribly wrong in Wolf Ridge or is Wyatt imagining everything? Is the sickness real or are people just naturally prone to doing bad things? Can Wyatt and her friends come out of the Violent Season unscathed or is one of them go
Post a Comment
Read more

All of Us Villains by Amanda Foody and Christine Lynn Herman 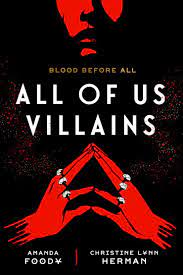 I think I just read the newest bestseller! All of Us Villains sees seven teens from seven different families fight to the death under the Blood Veil in a contest that determines which family gets to control High Magick for the next generation! The description of this book compares it to The Hunger Games,  but I would also compare it a bit to The Maze Runner as well!  There is so much to love about this book. While there are seven "Champions" in this tournament to the death, the story is told from the perspectives of four of them: the monster Alistair Lowe, the sure-fire loser Gavin Grieve, the first named Champion Isobel Mascalan, and the one who was never actually officially named Briony Thorburn. These four champions each have their own skills, their own strategies, and the own weaknesses and secrets. Throughout the story, you will find yourself rooting for each of them at different points and you will also be sure each will win in the end. The ending, no doubt, will leav
Post a Comment
Read more 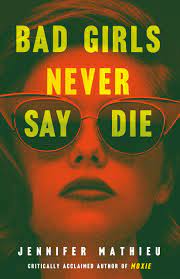 This book was a lot of fun. Characterized as a female re-telling/re-imagining of The Outsiders, Bad Girls Never Say Die is set in Houston, Texas in 1964. After being rescued from an attack outside of a bathroom, bad girl Evie befriends "Tea Sipper" Diane and welcomes her into her tightly knit group of fellow bad girls. With the help of the Bad Girls, Diane and Evie try to lay low while the news of Diane's crime blows over. When someone else is pegged as the prime suspect, Evie and Diane come up with a plan to right the wrongs and get everyone out of trouble. The only problem is, who's going to believe them? I grew up loving The Outsiders so when I read the premise for this book I was quite intrigued. I LOVED THIS BOOK. After writing the girl-empowering Moxie, Jennifer Mathieu creates another world where it's ok to be a "bad girl" if that means you are really an empowered and confident girl! I think it's important to note that this book isn't ju
Post a Comment
Read more 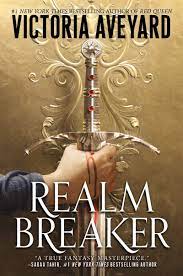 It's been a while since I posted because this behemoth of a book is 576 pages! I absolutely loved Victoria Aveyard's Red Queen series. It was absolutely incredibly (so if you haven't read it, go find it now!) I was eager to see what Aveyard has planned for her new, completely unrelated novel and Realm Breaker certainly didn't disappoint.  Corayne is seemingly a normal girl who lives in a world where her mother is a fierce and feared pirate. No big deal, right? That is until one day when she is approached by an Elder, someone who is immortal, who claims that she just might be the secret to saving the world from being completely destroyed. It seems there is a dark and powerful force (referred to as "What Waits") that wants to simply turn every realm to ash. It is up to Corayne and this Elder to recruit a misfit team together to somehow save the world. The differences in the characters and how they interact is probably the best feature of this story. You will t
Post a Comment
Read more 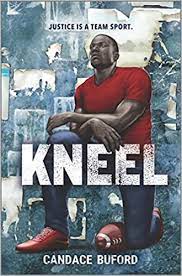 Russell Boudreaux is a captain and star tight end on his Louisiana high school football team. This year he plans on helping his team go all the way, especially after suffering a brutal loss to his school's closest rivals in last year's playoffs. As in navigating the normal high school life and grueling football season wasn't enough, Russell's world is rocked when there is a shooting of an unarmed black star basketball player in a neighboring town. No charges are filed against the officer; rather, he is simply transferred to the station which monitors Russell's town! Racial tensions are high, but come to a head when a pre-game altercation occurs between Russell's team and their all-white rival. Punches are thrown, the game is called, and only Russell's star Black quarterback, Marion, is arrested. Russell simply can't believe the injustice of it all when it was clear that it was the white players who started it, not to mention the white officials who sai
Post a Comment
Read more
More posts